I’m a little brother, and imitation is in my nature. I started wearing baseball caps because my oldest brother wore them. I grew my hair long in high school because that’s what my other brother did. I took German with Ms. Hollie instead of Spanish because all of my siblings did. Now, I find myself as a teacher wagging my finger at students who didn’t turn in their homework, saying in an *extremely German woman voice*, “Das ist nicht gut,” because that’s what Ms. Hollie did. Even the *extremely X voice* joke construction is an imitation, an appropriation of a joke belonging to the public domain.

Of course, when I began writing, imitation formed the foundation upon which my stories were built. In high school, I rarely read anything for a class published beyond 1960, so when I sat down to write my first serious story, I thought to myself, “Who’s the best writer? Hemingway? Probably Hemingway.” So I set out to write like Hemingway. My sentences shortened. I removed all adjectives. I wrote exclusively from the third-person objective point of view. Naturally, what I wrote wasn’t any good, and I wasn’t enjoying myself. I didn’t find this unusual because (A) writing is hard and (B) writing is supposed to be a torturous, a self-sacrificing act made for the sake of the art, man. “I don’t enjoy writing, I enjoy having written” and all that.

Mostly, I felt like a different person when I was writing, which is obvious in retrospect. I was trying to be a different person. I hadn’t yet found my voice nor was I looking for it. It wasn’t until I read Junot Diaz’s The Brief Wondrous Life of Oscar Wao that I felt like I could tell my stories in my own voice. Here was a serious piece of literature that didn’t get caught up in its own seriousness, in which the narrator talked about Dungeons & Dragons, which used the watchers from Fantastic Four as a conceit for its perspective, and likened the fall of a Dominican dictator to the fall of Sauron. Most importantly, it wasn’t trying to be like any other book. It’s embarrassing, but at the time, I didn’t know you could write like that.

It wouldn’t be until I was in grad school when I took a creative writing pedagogy class that I would have a vocabulary for this experience. In that class, we talked about how important it is for beginning creative writing students to discover authors who show us there’s more than one way to write a story. The ones who change you as a writer. The ones that give us permission to write, like Diaz had done for me.

There’s an important distinction between writers we imitate and writers who grant us permission. Writers we imitate tell us what we should be writing and writers who give us permission tell us what we can write. They expand our limitations and allow us to take risks. They jump off the cliff and disappear beneath the water’s surface, only to reappear a moment later and call up to us, “Come on in. The water’s fine.”

I’m constantly on the hunt for writers like this, and I found another this summer in Juan Martinez. Each story in Martinez’s collection, Best Worst American, showcases his humor and his perspective in unique and refreshing ways. His imagination allows him to mine a story where another writer might overlook it. Stories like, “The Spooky Japanese Girl is There For You” and “The Lead Singer is Distracting Me” redefined for me what a story could be. I felt as if I had unlocked hundreds or even thousands of potential stories. 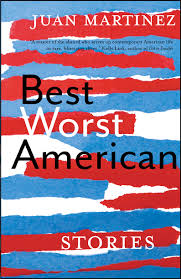 The experiences I had with Diaz’s and Martinez’s books were key in my ongoing development as a writer, but another writer reading the same texts likely won’t have the same experience. I couldn’t, for instance, throw a reading list of Junot Diaz and Juan Martinez (and George Saunders and Karen Russell and Flannery O’Connor and Rebecca Makkai) at a group of creative writing students and expect them to have the same breakthroughs I had. If I did that, I’d be no better than my high school that threw The Canon™ at me.

Kenny Kelly received his MFA in Fiction Writing from Columbia College Chicago. His short stories have appeared in Joyland Magazine, Berkeley Fiction Review, Toad Suck Review, Habitat Magazine, and Watershed Review. He writes about the Chicago Cubs for Baseball Prospectus: Wrigleyville, and he is a substitute teacher for Chicago Public Schools. You can follow him on twitter @kennykellywords. View all posts by Kenny Kelly